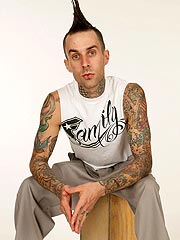 On Aug. 14 – a week after he filed for divorce – Barker, 30, posted a scathing message on his MySpace.com page accusing Moakler, 31, of partying hard, not spending enough time with their kids (Landon, 2, and Alabama, 7 months) and sleeping too much.

In an exclusive interview with PEOPLE, Barker explains, "I was hearing things in the press that Shanna was saying about me and it got to the point where it got so foul and so false that I wanted my fans to hear from me directly."

Moakler fired back to PEOPLE, "(His) airing of our dirty laundry in the media is not conducive to the well-being of my children, and I want no part of it."

On Tuesday, Barker talked to PEOPLE about what went wrong in his marriage, a certain egg-throwing problem and the MTV curse.

PEOPLE: How are you doing? Are you angry or sad?
BARKER: I'm not in the angry phase at all because I'm still absolutely in love with Shan. It feels weird to not wake up to my children every day, to be honest. But I sneak over every morning to see the babies.

PEOPLE: Do they understand what's going on?
BARKER: Well, 'Bam is seven months old. She just pisses herself when she sees me because she's so excited because she was used to seeing me so much during the day. And my son just thinks I'm working like crazy right now.

PEOPLE: When did things start going downhill with you and Shanna?
BARKER: About a year ago. I don't know if it was me touring and me constantly getting accused of things. She was unfortunately in a relationship before where someone was unfaithful to her and she told me when we first met that it scared her. I understood that going into it, but I didn't know it would be to the extreme that it was. To the point where I couldn't have friends that were girls and I couldn't hang out with my guy friends. They would get egged if they came to my house.

(Through her rep, Moakler responds: "I did egg his manager's car on one occasion and at the time it was well deserved and well worth it.")

PEOPLE: You said you tried therapy. Did it help?
BARKER: I think therapy is super effective if both people are willing to be honest and if they are willing to listen and to really deal with the problem. Nobody's right or wrong in what happened between Shanna and I. I grew up different than her.

PEOPLE: What were those differences?
BARKER: I came from a broken home. Through the process of my parents getting a divorce, my mom died (of cancer). And, that being said, I want everything I didn't have growing up. It would be crazy for me not to. I wanted much more for my children. I wanted a mom (for my kids) that would wake up before 3 in the afternoon. I wanted a mom who wouldn't stumble in at 4 in the morning after me not knowing where she is.

PEOPLE: You felt you and Shanna were focused on different things?
BARKER: Yeah. I think the priority should be the kids. My No. 1 priority is my children – more than the studio, more than my clothing line, more than my skateboard room or my Cadillac, anything. We didn't have that same feeling. She didn't prioritize our life and our family in the same way I do.

PEOPLE: Some examples?
BARKER: If I had to go out at midnight to work, like if I had a show with DJ AM, my wife then goes, "He's out having fun." She'll get mad that I'm working at a place where she'd just like to go out and get drunk. And she'll go, "Well, you were out." No, I was working. I was performing.

PEOPLE: What will you do differently next time?
BARKER: I like falling in love. I'll follow my heart. I don't have any plans right now. I'd love to hang out with a girl and have a friend for company. But I can't even think about that right now.

PEOPLE: Do you plan to keep your "Shanna" tattoos?
BARKER: It's part of my life and I love her. It's not like I've written her off or anything. If anything, it's a time in your life. You are documenting the time in your life.

PEOPLE: Did she give her 4-carat Cartier engagement ring back?
BARKER: She can wear it on her right finger.

PEOPLE: You're not asking for it back?
BARKER: No.

PEOPLE: Do you think there's an MTV curse? You and Shanna, Dave Navarro and Carmen Electra, Nick Lachey and Jessica Simpson have all split after having reality shows about your marriages.
BARKER: I do. I think putting your relationship out there for people to interpret and have their own opinion about, I think it's crazy. Ours was different 'cause it showed a young couple who could still get down and reach for their goals and dreams. But I still feel like it puts a lot of stress on the relationship.